It seems this poor blog has been sadly lacking the mention to glass recently. And as I am yet in no condition to create and post glass work of my own, I have decided to sharing the work of other artists in my collection. I have been working on ideas for future projects one of which lead me back to a familiar passage from Shakespeare's Hamlet which in turn brought o mind a series of beads made by Nina "Sam" Hibler. The specific text in question was the Queen's description Ophelia's demise...
"There in a will ow grows askant the brook,
That shows his hoar leaves in the glassy stream;
Therewith fantastic garlands did she make
Of crowflowers, nettles, daises, and long purples,
That liberal shepherds give a grosser name,
But our cold maids do dead men's fingers call them .
There on the pendent boughs her crownet weeds
Clamb' ring to hang, an envious silver broke,
When down her weedy trophies and herself
Fell in the weeping brook. Her clothes spread wide,
And mermaidlike awhile they bore her up,
Which time she chanted snatches of old lauds,
As one incapable of her own distress,
Or like a creature native and endued
unto that element. But long it could not be
Till that her garments, heavy with their drink,
Pulled the poor wretch from her melodious lay
To muddy death."

As I read this passage I thought of Sam's Ophelia Beads. Sam has indicated her inspiration can from the Pre-Raphaelite painting Ophelia by John Everertt Millais but when I read the passage above I visualize the water and it's contents much like those captured in the small worlds Sam creates. That may be what drew me to these beads to begin with. So much is contained in them, the hint of a story is told and one's imagination can unfold the rest. 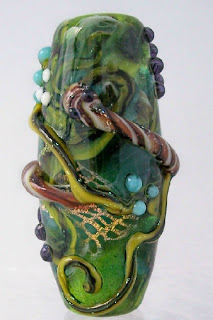 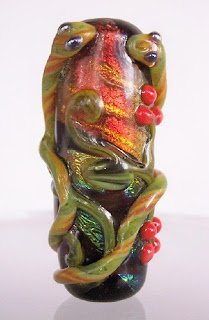 Beads and photos by Nina "Sam" Hibler at Dream Fire Glass
-
I keep purchasing these beads but have never found a way to wear them I am happy with. In the end I displayed my set in a case where I can see them everyday and take them out and fondle when ever I want. I realize that has a bit of a sexual overtone but hey, they're kind of sexy beads. And yes, those are snakes.
-
Posted by Nicole V Lozano at 9:47 PM
Labels: Dream Fire

Hi Nicole,
Thanks so much for the comment on my blog about Paris. It is very encouraging to hear what everyone has to say. I think I have surrounded myself with too many grumpy people. And I do let what other people say bother me and influence me much. I agree with your analogy about the Riverwalk. I agree that if it is my dream I have to set the goal, save money and go. I am so jealous you have been several times. Lucky you! I am in awe with your art and artist like you. You are so talented. By the way these beads are so interesting. What size are they? Are they small beads to wear on necklaces? It amazes me how someone can make such tiny pieces of art.

The beads vary in size from between 1 and 2 inches long/tall. They are a great size for a focal pendent and can be strung or wire wrapped. I love looking at them and finding all the microscopic details.