Control, Or Lack There Of

Several months ago, someone suggested I create a piece out of pure spontaneity, quickly and without thought. The intent was I act on emotion and instinct. I was supposed to abandon the need to control the result (hah) and enjoy what happens in the moment. To see what would come if I just let go.

That was several months ago. Although I agreed to the exercise I had not been able to bring myself to actually do it. Just thinking about this supposedly simple and cathartic assignment would stress me out. Frankly, I wasn't sure I could even do it. You see I’m a planner… okay a bit of a control freak I can admit it. So, for the last two months I procrastinated. Once again it was Melanie with an Inspire Me Thursday Creative Prompt that put the boot to my backside and kicked me outside of my safe little box.
- 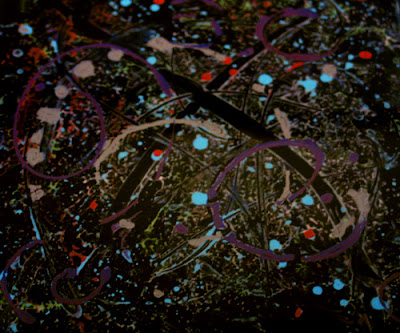 -
Posted by Nicole V Lozano at 12:08 AM
Labels: Inspire Me Thursday

More then one way to recycle glass

The easiest way to recycle glass is to make sure it gets into the right trash bin. San Antonio has one of the largest curbside recycling pickups in Texas, with pickup once a week. Here are a few links to information about local recycling efforts:
Texas Recycle Day - November 15th
San Antonio Texas Neighborhood Recycle
Bexar County Recycling efforts
Abitibi Paper Retriever location

-But really why stop there. One of the wonderful things about glass is that it melts and through this process can be reshaped into an entirely new thing, a new life. Here are a few wine bottles I’m using to create artistic or functional glass pieces. In the interest of full disclosure, this is my first attempt at using recycled glass. So to not have any issues related coefficient of expansion (COE), I have chosen to use material from one bottle for each piece and not to mix any of the glass. I am also taking scrupulous notes so I can later reflect and learn from this experience. 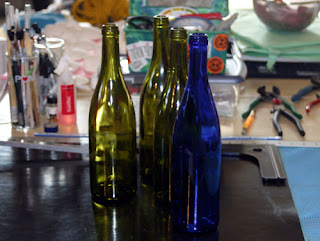 -
After cleaning the bottles, I broke them and am using the material to create individual six inch round blanks from which to later work.
-

I had a fabulously messy time, my favorite kind, in a workshop taught by Kerry Transtrum at Wired Designs Studio, October 6-8. The class was on casting the human form in glass with the focus on mold making. We utilized various techniques to make temporary and permanent molds of our faces, hands, feet, etc. Until now I had only limited experience making one-off molds and this workshop took my understanding and skills to the next level. I was having so much fun working closely with friends and fellow glass artists, verse in my garage alone late at night, that I didn't realize how much I was learning. We used the molds we created to cast negative reliefs and positive images of our faces using glass billet. Although I will not have examples to show for several weeks, because they are still developing in the kiln, I can show you pictures of the initial step we took to make temporary molds of our faces. Plugging our noses and breathing through a straw we completely covered our faces for several minutes. Would you believe me if I told you it was strangely relaxing?
-
- 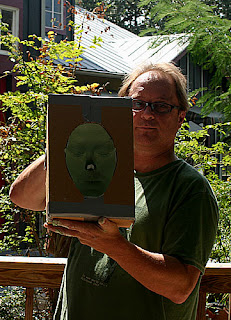 -
That was the other odd thing about this process. The molds I made for this workshop were of myself. So, the face(s) I created in glass are of me... only I don't think they really look like me. It's like hearing your voice on tape. It never really sounds the way you hear yourself.

Thanks Kerry and Wired Designs for this wonderful opportunity! 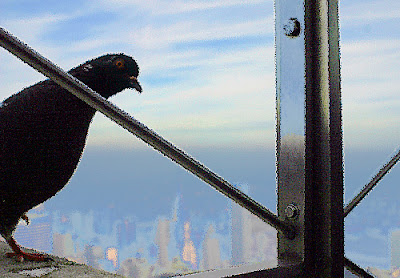 New York City pigeon shot with a Canon EOS Rebel T2, altered in Adobe Photoshop
-
The picture above was taken on top of the Empire State Building. If I were any other tourist I would have been focused on pictures of the panorama. Not to say I didn't get a few, but what caught my attention was this pigeon. He was just watching me. At about the same time, back home I had been sharing my work space with a pair of Carolina Wrens. They had nested in my garage and before I discovered them laid eggs. I didn't have the heart to evict them in their condition. The female would sit on the nest all day undisturbed by me or the often loud noises of my work. I would have the radio on, saws and grinders going and there were frequent sounds of breaking glass. She would sit there with her eyes constantly on me. She didn't appear nervous or threatened, just ever aware. I felt a kinship with her, we talked some but mostly just watched each other. Many people enjoy watching birds and looking them up in books to identify them. But the way they look back I wonder if they aren't studying us. Was this pigeon thinking, this particular type of Latina female is indigenous to the central region of Texas and does not normally migrate this far north. Did he note my coloring or the food I ate in comparison to others? Are we watching them, or are they watching us intently with those eyes?
-

Since originally posting this item, I came across this picture taken of me on top of the Empire State Building only moments before spotting that bird.
-
-
-
Posted by Nicole V Lozano at 10:59 PM
Labels: Inspire Me Thursday 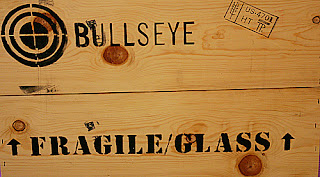 -
The last weekend of September was Wired Designs Studio’s HUGE Bullseye glass sale. It took two days, with all hands on deck, to unload the shipment of around 30 cases of glass. But it took me only a few minutes to pull the sheets I knew had to come home with me. Here’s at peek at some of the glass you may see turn up in some of my future pieces.
-

I have recently been added to the list of artists and craftsman on the Juried Online Arts Festival (JOLAF). The site acts as a directory for those looking to purchase original art or handmade craft directly from the artist. You can find artists from all over the world, working in a variety of different mediums. In addition to searching by medium, you may also search by last name. It makes it easy for someone wanting to view/purchase the work of quality independent artists by linking directly to the artist's website. It's worth a look.
Posted by Nicole V Lozano at 10:20 PM