In late March I began work on two twin bowls in response to the Inspire Me Thursday challenge Two. Although I was able to complete the pieces by weeks end I was not fully satisfied. They still needed something, texture. So several weeks later I went back for yet another firing. This time I was adding a raised slightly ruff element to contrast the smooth surface of the rest of the bowl. Now that's better... 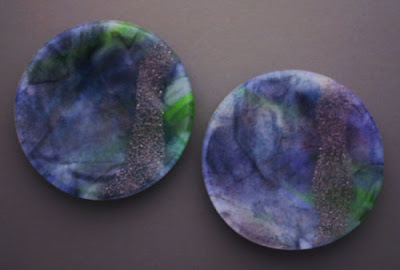 I spent this past weekend teaching introductory Glass Fusing and Design workshops at Wired Designs Studio. In class students watch me demonstrate techniques by making an example project before they create theirs. During one of these exercises we began discussing inspiration and this theme seemed to carry through the entire weekend. The initial question was if creation is better if it is planned or in the moment? During workshops my small projects are made in the moment. I never really know what materials and colors will be available, so planning is generally not helpful. At first it was kind of difficult to make something knowing I had only a finite amount of time, unknown supplies and ten pairs of eyes staring at me. Over time this challenge has helped me learn to think through design options on the spot. Nothing I make in class is a "master piece" but some things turn our rather lovely. This is not at all the way I work outside of class. I can be slow and linger over projects for long periods of time. I journal ideas, take detailed notes and return to projects over and over to change things. Sometimes I know exactly what I am after (whether I can achieve it or not is another thing). Other times the concept develops one piece at a time, like the piece I did for the SACG Spring Exhibit - A Rough Night on the Morsel. This was more a case study which I hope will lead to other projects. In both cases I'm a thinker, slow and meticulous.

Nina "Sam" Hibler with Dream Fire Glass does a wonderful job of taking her inspiration and translating it directly into her work. I love to watch her work through a concept from beginning to end. It's not uncommon for to see her one day with a book or a swatch of fabric and then over the following weeks working to develop a concept which translates that original inspiration into her work. I watched her do that with the Fiesta necklace and again as she worked on a series of tide pool beads, like the Jelly Fish below. Each sea creature and plant life was researched before hand. This effort shows in the detail, color selection and perceived movement of the currents in each bead. Someday when I grow up I want to be just like Sam, only a fuser.
- 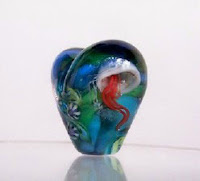 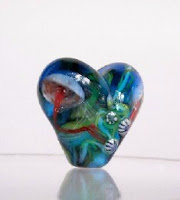 -
-
-
-
-
-
-
-
-
-
Bead and photo by Nina "Sam" Hibler
A fitting closure to this weekend’s theme came Sunday night when I joined a visiting artist, one of the Wire Designs Studio partners and Sam for dinner. During our conversation it was mentioned that if you are spontaneous you shouldn't force yourself to plan it may stifle you and if you are a planner you shouldn't necessarily try to be spontaneous it may come across forced. Do what works for you. Be who you are. I found this thought a very poignant and comforting end to the weekend’s discussions on inspiration and execution.

How do you work? Are you a planner, do you go where the wind takes you, or something entirely different?
Posted by Nicole V Lozano at 9:32 PM
Labels: Dream Fire, SACG, Wired Designs Studio 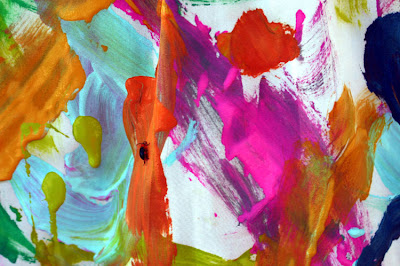 -
Sunday morning a small band of San Antonio Visual Artists (SAVA) took to the streets of downtown armed with paints, brushes and a trolley pass. Stopping briefly (for no more the 5-7 minutes) in front of the Alamo, along the Riverwalk, Market Square and Commerce Street we painted canvases, Plexiglass and yes even ourselves. The focus of this guerrilla art activity was the action. We came out of nowhere, created in a frenzy of flying paint (sometimes literally) and then were off. Artists were painting other artists while being painted themselves. I’m not sure if we attracted more attention with our actions or our appearance, but in the end a good time was had by all.
- 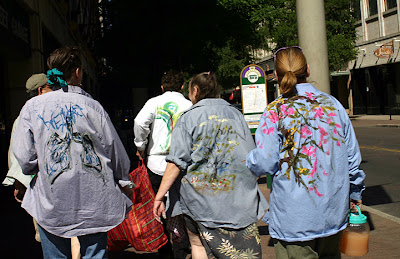 walking through downtown San Antonio, with wet paint on our backs 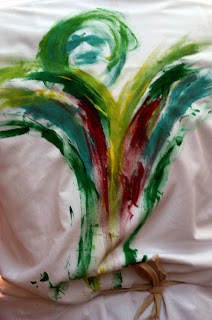 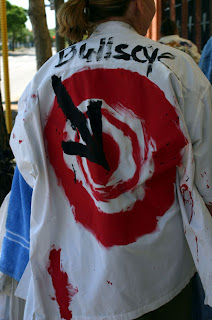 Posted by Nicole V Lozano at 1:10 AM
Labels: SAVA

A Rough Night on the Mosel

While I was away experiencing Glass Craft Expo in Las Vegas, The San Antonio Calligrapher’s Guild (SACG) annual Spring Exhibit opened. This year three pieces were successfully delivered; Love the piece which I had intended to hang last year without success, a small series inspired by Jackson Pollock, and a piece which started as part of my participation in the 2007 Blog Action Day. 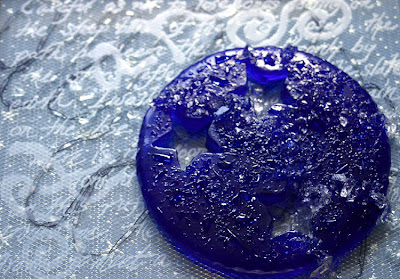 This piece was an experiment from beginning to end. Starting with recycled glass from shattered wine bottles I cast the material in six inch rounds. One of those bottles was from a German Riesling. It had a lovely color which reminded me of the night sky. To this piece I added three stars. When the piece came out of the kiln I did some primary cold work and set it aside.

Months later I picked it back up, although still unsure what I wanted the end result to be I knew it should be rough. It called for texture, so I gave it some carving up the edges and adding raised shards of the glass to the surface.

At the same time I began searching, wondering and researching the original wine bottle. I found the contents it once held came from the German wine region along the Mosel River, a winding river known for its sharp banks lined by vineyards. I began to write the story of a late night walk along these banks on a clear sheet of glass. The text and the hand it was written in were crude, appropriately mirroring the rough starry night I would soon mount covering much of the text in the process. On top of this sheet of glass I loosely dripped etching cream to spell out the word Stars. With this the first layer was complete.

Behind this sheet of glass came a silver ribbon winding it’s way diagonally from top to bottom. The Mosel River had made its’ presence. Then a sheet of wire mesh, the vines, followed by a second pain of glass with text made almost invisible by the things in front. Finally a sheet of paper filled with stars. The piece was constructed, torn down and rebuilt several times before this multi media presentation of glass, fiber, metal and paper was finally framed.

Satisfied with the experience this experiment afforded, I look forward to continuing to develop the ideas which it generated.

This week's Inspire Me Thursday challenge is #2.
-
My response, twin glass bowls just 5 inches in diameter
- 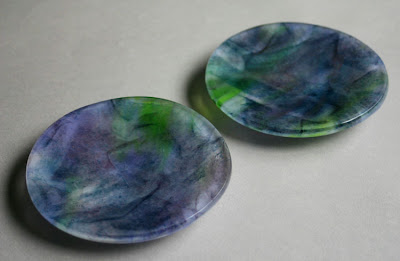