I am excited to be organizing a special docent tour of the Jeanne and Irving Mathews Collection of Art Glass at the McNay Museum, on hehalf of the San Antonio Glass Art Guild (SAGAG).
-
The Jeanne and Irving Mathews Collection of Art Glass, was assembled by Mrs. Mathews with her husband, Irving, who passed away in 1993. Focused on the Art Nouveau and Art Deco periods in France, the exhibit includes work from Daum Frères and Emile Gallé to René Lalique, as well as rare works by Gabriel Argy-Rousseau, François Decorchement, and Jacques Gruber. This first showing of art glass from the Mathews Collection appears in specially designed cases, ideal for small sculpture and decorative arts, on the Garden Level of the Stieren Center for Exhibitions.
-
To particiate, you will need to bring $5 per person. This includes your museum admission. Upon completion of the docent tour of the glass exhibit, you will have access to view other exhibits at your leasure.
-
Posted by Nicole V Lozano at 12:55 AM
Labels: SAGAG

wrote of Ophelia and her demise an abundance of artists, writers, actors and musicians have applied their perspective to her story and used her image symbolically. To which I add my own, currently on display as part of the Kerrville Art & Cultural Center as part of their invitational glass show Luminous.
- 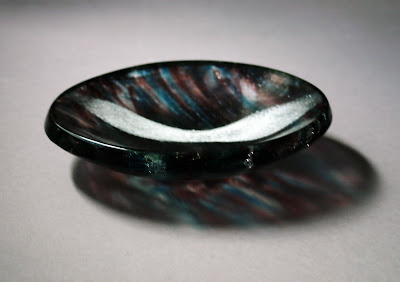 8 1/2" in diameter 1/2" thick cast glass bowl
-
Several years ago, I shared with you the Ophelia series of glass beads created by Nina “Sam” Hibler. They were inspired, I believe, in part by the Pre-Raphaelite painting of Ophelia created by John Everett Millais. For the last 12 years an Ophelia like print of The Young Martyr by Paul Delaroche has hung in my home. Although I was not consciously considering it when I made this piece, it obviously had an effect. Other influences included Arthur Rimbaud’s poem on the subject.
-
I
On the calm black water where the stars are sleeping
White Ophelia floats like a great lily;
Floats very slowly, lying in her long veils...
In the far-off woods you can hear them sound the mort.
For more than a thousand years sad Ophelia
Has passed, a white phantom, down the long black river.
For more than a thousand years her sweet madness
Has murmured its ballad to the evening breeze.
The wind kisses her breasts and unfolds in a wreath
Her great veils rising and falling with the waters;
The shivering willows weep on her shoulder,
The rushes lean over her wide, dreaming brow.
The ruffled water-lilies are sighing around her;
At times she rouses, in a slumbering alder,
Some nest from which escapes a small rustle of wings;
A mysterious anthem falls from the golden stars.
II
O pale Ophelia! beautiful as snow!
Yes child, you died, carried off by a river!
It was the winds descending from the great mountains of Norway
That spoke to you in low voices of better freedom.
It was a breath of wind, that, twisting your great hair,
Brought strange rumors to your dreaming mind;
It was your heart listening to the song of Nature
In the groans of the tree and the sighs of the nights;
It was the voice of mad seas, the great roar,
That shattered your child's heart, too human and too soft;
It was a handsome pale knight, a poor madman
Who one April morning sate mute at your knees!
Heaven! Love! Freedom! What a dream, oh poor crazed Girl!
You melted to him as snow does to a fire;
Your great visions strangled your words
And fearful Infinity terrified your blue eye!
III
And the poet says that by starlight
You come seeking, in the night, the flowers that you picked
And that he has seen on the water, lying in her long veils
White Ophelia floating, like a great lily.
Arthur Rimbaud

Today I lead a Fusing I workshop at Wired Designs Studio. During these classes, I like to direct students to resources they can go to review the material we discussed. Consistently the resources I have recommend include Contemporary Warm Glass by Brad Walkers

. This Year Brad Walker put out a updated version of his book as Contemporary Fused Glass

. It includes much of the same content as the original but with updated technical information and examples of contemporary glass artwork.  This is a great resource for anyone interesting in pursuing kiln formed glass. My advice to students, read it through so you are familiar with what it contains. Then keep it handy so you can refer back to it with you have questions or are preparing for a project.
- 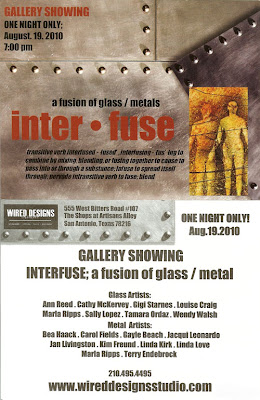 Please join Gail Stouffer, Liza Connell and the rest of the Wired Designs team as we celebrate the successful completion of yet another intermediate seminar. This one night show will highlight the work of eight glass and ten metals students whose work demonstrates the increased technical depth they have achieved during this intensive nine week course.
-
Thursday, August 19th
7:00 PM
-
Posted by Nicole V Lozano at 12:21 AM
Labels: Wired Designs Studio 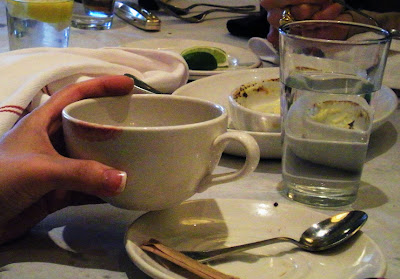 -
or the golden bowl be broken...
Then shall the dust return to the earth as it was;
and the spirit shall return unto God who gave it.
Ecclesiastes 12:6-7
- 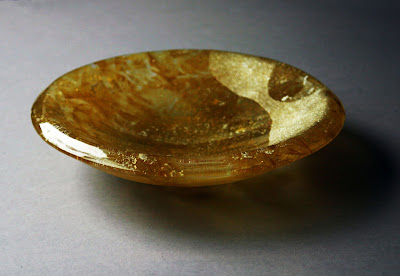 I love to read. At times I latch on to a subject or an author and read until all is consumed or the hunger is satisfied whichever comes first. As a young girl I devoured Jane Austin and Jack London at different times for different reasons. Down the road a bit, I found myself reading the work of Henry James

. I return to one novel, The Golden Bowl

, every few years. The story focuses on two couples, but it is the women Charlotte and Maggie who stand out to me. Childhood friends who grow to be such different women in character and temperament, they become an interesting study of femininity.
When working on my version of the golden bowl, an object that crosses between these two women and revels all, I took into consideration not only the object in the story but the character of those who come in contact with it. The bowl in the story is fragile. It cracks not only furthering the plot but somewhat symbolic of the situation the characters find themselves in. My Golden Bowl is not delicate at all. Rather it is substantial and strong, like the characters themselves. The female silhouette with the cinched waist of corseted Victorian woman, shines on the surface. I wonder, whose path will my Golden Bowl cross. What stories might it become a part of? At present you can cross the path of this piece by stopping in the Artisans of Rocky Hill gallery in Fredricksburg, Texas.
-
Posted by Nicole V Lozano at 12:38 AM
Labels: Artisans of Rocky Hill